Since the revolution of Cryptocurrency in the pandemic, many people have been wondering what is USDT?. Tether, also known as USDT, is a cryptocurrency whose value is directly pegged to underlying fiat currencies such as the dollar, the euro, or the Japanese yen. It is a currency that maintains its price by fluctuating around $1. Tether is a stablecoin that is widely accepted and used in the cryptocurrency sphere. It can be purchased with almost any other cryptocurrency or fiat currency. The value of Tether is always 1 USDT = $1, and it trades steadily.

USDT is a Tether coin which is also a cryptocurrency but it has a stable value in the crypto world. USDT price is always equal to one dollar because it is not mineable and only available at cryptocurrency exchanges. We all know that popular cryptocurrencies like Bitcoin and Ethereum are highly volatile from a market presence perspective and cause significant price fluctuations. If you are still unfamiliar with the Bitcoin then read here to find the what is Bitcoin. Anyone who has been a long-time cryptocurrency investor, or is new to this crypto world, is aware of price fluctuations that are frequently observed in the cryptocurrency market. Each positive and negative news headline in the market affects first Bitcoin’s price, then all altcoins, and eventually the crypto market.

This is why people think and research more in advance when they are planning to buy Bitcoin. So, at times like this, the importance of stablecoins and especially Tether as investment tools has become even more clear. While most cryptocurrencies are vulnerable to volatile value fluctuations, Tether (USDT) claims to be linked to the US dollar price. That is why Tether’s stability makes it a more reliable medium of exchange and safe store of value.

When we look at the Tether chart (USDT Chart), we see a less volatile asset compared to other cryptos. 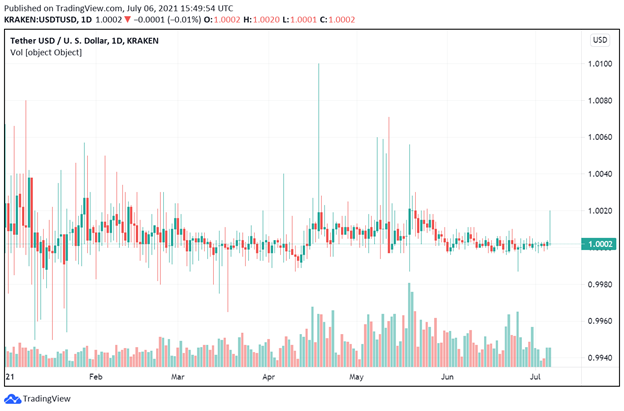 We often hear the word stablecoin in every process involving Tether. Stablecoin meaning is a type of cryptocurrency that is usually pegged to another fiat currency or valuable asset. In other words, a stablecoin is designed to maintain a stable or unchanging market value as an asset to which it is backed.

If you are interested in managing volatility in the cryptocurrency market, you must probably already find out “why do stablecoins matter”. In the world of digital money transfer, the high volatility of cryptocurrencies is a major obstacle to be addressed, and one of the solutions that have been presented in this regard is stablecoins. Since the values ​​of many cryptocurrencies are highly volatile, stablecoins have been receiving strong demand in recent years.

The problem that stablecoins are trying to solve is the availability of a stable cryptocurrency in a volatile market. Since its value is restrained to a stable currency (fiat, typically the US dollar) or asset, if you own a stablecoin, you do not face one price today and a completely different price the next day. A stable rate provides many possibilities for users. With stablecoins whose price is directly tied to the real asset, people do not waste time and resources trying to protect their savings.

If you are looking to buy Bitcoin then you also must be looking to buy USDT because you need to get in and out of the cryptocurrency market whenever you want and the best way is to convert all your coins into stablecoin. This way, when the market is bearish you can easily save yourself from loosing a lot of money. You can easily purchase any cryptocurrency with Coinsfera with cash locally at their OTC exchange shop.

Tether, which goes by the ticker USDT, is a cryptocurrency linked to the US dollar. With a market cap of over $60 billion, Tether is the third-largest cryptocurrency at the time of writing. USDT is generally known as the most commonly traded base currency for trading on a large part of the crypto exchanges. The reason for that is very simple – this asset is less volatile compared to other cryptocurrencies. 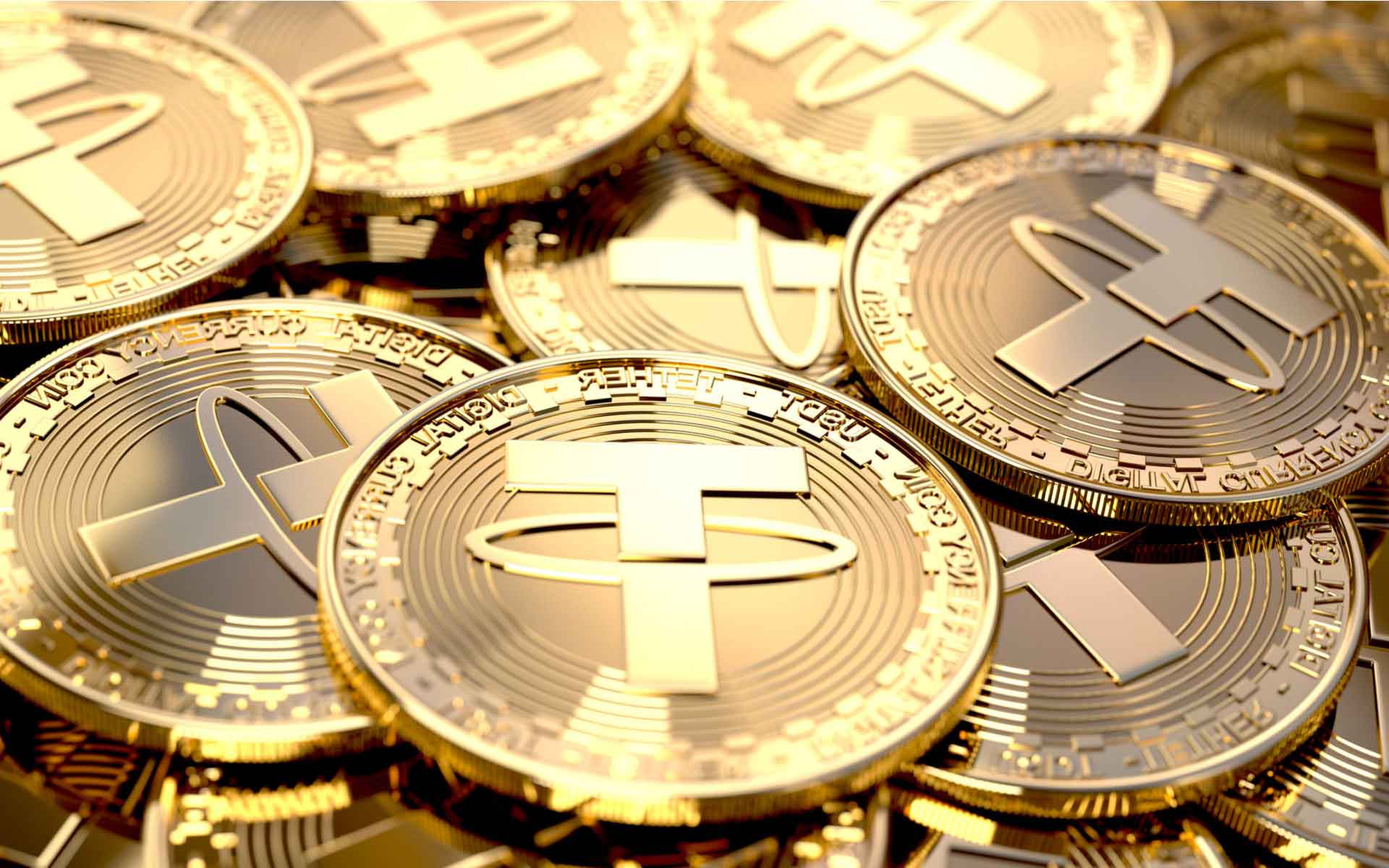 The cryptocurrency was essentially issued in January 2012 when software developer J.R. Willett published a whitepaper explaining the possibility of creating cryptocurrencies that replicate the price trend on top of the same Bitcoin protocol. Based on a protocol similar to Litecoin, Tether (USDT) aimed to address the volatility concern in cryptocurrencies by providing actual dollar-denominated reserves, or $1 for 1 USDT.

Tether, the virtual version or crypto version of the US dollar, was one of the first stablecoins on the market and was launched in July 2014 under the name RealCoin. The first tokens were issued on the bitcoin blockchain on October 6, 2014. But just a month later, on November 20, 2014, Tether’s CEO, Reeve Collins, announced a kind of “rebranding”, indicating that the project had been changing the name to “Tether” and that work was being done to secure the project. After the Tether rebranding, the project promised to overcome many shortcomings of standard cryptocurrencies. As mentioned, it supported three different tokens that would be linked to the US dollar, euro, and Japanese yen.

The first exchange to integrate the new token into their operations was Bitfinex in January 2015, followed closely by the major platforms in the market. In September 2017, Tether announced that it would launch additional ERC-20 tokens for the US dollar and euro on the Ethereum blockchain. Therefore, there are currently four different Tether tokens made as ERC-20 tokens on both Bitcoin’s Omni platform and Ethereum platform.

What Is the Relationship Between Bitfinex and Tether?

After finding the answer to the question of what is USDT, a second important issue arises. The connection that Bitfinex and Tether have developed. Bitfinex was the first cryptocurrency exchange that added Tether (USDT) to its ecosystem in 2015. While investors’ demand for Tether has increased rapidly, at the same time, the Hong Kong-based Bitfinex exchange has also gained a significant reputation.

Although both Bitfinex and Tether started as separate entities, between 2015 and 2017, they became inextricably linked. Then, this mysterious relationship formed between Bitfinex and Tether LTD continued to nothing but raise many questions in people’s minds until today. In 2018, Bitfinex opened a $900 million credit line on behalf of stablecoin company Tether Ltd, of which $750 million was used by Bitfinex instead of Tether.

In the same year, documents leaked as part of the Paradise Papers revealed the close ties between the two companies.

Until 2019, cryptocurrency exchange Bitfinex was in cooperation with a firm called Crypto Capital. Crypto Capital executives were accused of smuggling money. After that incident, Bitfinex, which ended its partnership with the Crypto Capital company, ran a budget deficit of almost 1 billion dollars.

In April 2019, Tether Limited’s parent company and owner of the Bitfinex exchange, iFinex Inc., was accused of hiding an $ 850 million loss of corporate funds from investors and customers.  Court filings revealed that Bitfinex was suspected of stealing approximately $ 700 million from Tether’s cash reserves tied to Crypto Capital.

After investigations, the New York Attorney General’s Office began to suspect that Bitfinex may have used Tether’s reserves to close this budget deficit. After these events, Bitfinex and Tether were seen as “associate companies”, and these companies were managed by the same names.

The tether tokens were issued by Tether Limited, a company based in the British Virgin Islands, according to the New York Times. Tether’s website says it is headquartered in Hong Kong, with offices in the United States. 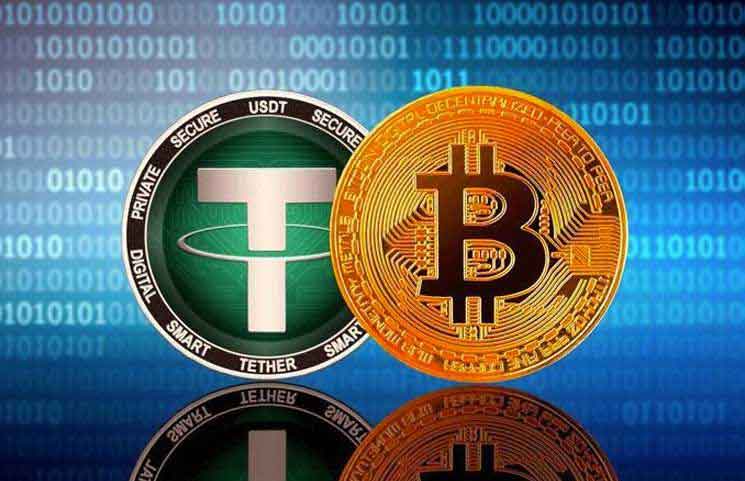 The company shares much of its management team with Bitfinex. The New York Times reported in November 2017 that the two organizations share the same operator, Philip Potter, and Giancarlo Devasini. According to Bloomberg, Devasini was the director of both companies. A look at both companies’ management reveals that Jan Ludovicus van der Velde is CEO of Bitfinex and Tether, and Philip Potter is responsible for strategy for both companies.

What Is Tether Actually Backed by?

The well-defined answer to the question of what is USDT coin is that it is a cryptocurrency that is issued only if each unit is backed by one dollar in Tether Limited’s reserves. Not only outside but also within the crypto community, there are questions about the legitimacy of the largest and most influential stablecoin. Is USDT coin actually backed by USD?

Tether Limited holds $1 in reserve behind each USDT. The company always tries to maintain its price by fluctuating around $1. Since March 2015, USDT has been observed at a fixed $1. Tether only dropped to 96 cents in March 2016 and 92 cents in April 2017 but increased to $1.4 in May 2017. USDT has been trading at a fixed price of $1 since then.

First and foremost, Tether is easy to understand as a cryptocurrency. You do not have to worry about when it will fall or when it will rise. Because 1 Tether is always equal to 1 USD. More or less, there is hardly any case of gain or loss. It has a volume of more than half a billion dollars. Exchange of other coins on Tether is always easier. Especially if you are a new investor, you may see Tether as a safe port. Another reason to buy USDT is the super-fast trading time. USDT can be used to expedite business transactions. This reduces the time it takes to complete a transaction in US dollar fiat currency.

What Is DeFi? What Are The Types Of DeFi?