Bcnex Announces Listing Of Tron (TRX) On Its Platform

Bcnex, a promising trading platform for cryptocurrencies, has listed TRON on its platform. The official announcement was made by Bcnex on September 20, 2019, through an official blog post on its website.

As per the announcement, TRX, for starters, will be available in three trading pairs which are TRX/BTC, TRX/USDT, and TRX/ETH. The deposits of TRX had begun on September 20, 2019, at 17:00 (SGT) while the trading and withdrawals started on the same day at 18:00 (SGT) onwards.

Justin Sun, the Founder and CEO of TRON, also confirmed the new development through his Twitter post dated September 24, 2019. 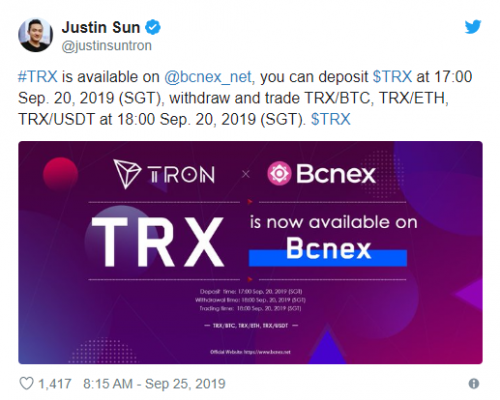 The Best In The Digital Asset Trading World

For those who are wondering, Bcnex has been founded by ambitious technology experts who believe in the value blockchain can bring to the world. Their belief translated into forming the basis of a budding crypto trading platform. The Bcnex platform is capable of handling up to 2,000,000 orders. Thanks to its utmost security, exceptional customer service, as well as lowest fees (0,0375%), it has garnered a reputation of being one of the best in the digital asset trading world.

TRON, on the other hand, is a dedicated project that works towards building an Internet infrastructure that is truly decentralized. The TRON Protocol is one of the biggest operating systems based on blockchain technology across the globe.

These Unstoppable Stocks Can Go One Better Than Bitcoin