Bitcoin is lethargic in its recovery following another dump to $9,600. Similarly, the general trend on the market is just as drab. Ethereum can barely hold above the support at $200 while Ripple has been unable to stay above $0.27.

The largest crypto in the cryptocurrency market is bullish especially after reclaiming the position above $9,700. However, a correction towards $9,800 is hampered by the high concentration of sellers at $9,776 (intraday high). 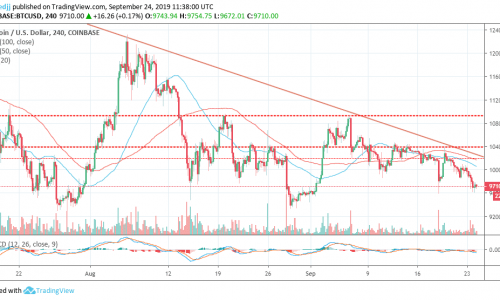 Technical indicators are still strongly negative painting a picture of a downside action that is not yet over. For instance, the moving average convergence divergence failed to cross above the zero lines following the recovery from the first drop to $9,600 (last week’s low). This left a gap that was later explored by the bears sending Bitcoin on another flash drop journey to $9,800 on Monday. The MACD’s visible divergence is negative signaling a stronger bearish momentum in the near-term.

In addition to that, Bitcoin is dealing with lower volumes as well as lower volatility levels. This means that recovery towards $10,000 without stronger fundamentals will lead to a subsequent drop in price. The most likely movement for Bitcoin is to refresh the buy zone at $9,200. This will create fresh demand thrusting Bitcoin above $10,000 and probably the next target at $10,400.

Bitfinex And Tether (USDT) Case Has Been Finally Closed