Tuesday 2nd October 2019, according to stats on LocalBitcoins, BTC is seen to have recorded a considerably high trading volume. As a matter of fact, today’s figures are the highest recorded in the history of bitcoin trades in Hong Kong.

This news, having been observed by industry experts has caught the attention of mainstream media as well as crypto Twitter. Popular crypto influencer and senior analyst at eToro, Mati Greenspan, also notified the crypto community of this development.

According to Mati, portfolio managers might regard bitcoin as a “necessary evil” and highly risky investment, however, many others treat the top cryptocurrency as nothing short of a safe haven investment. 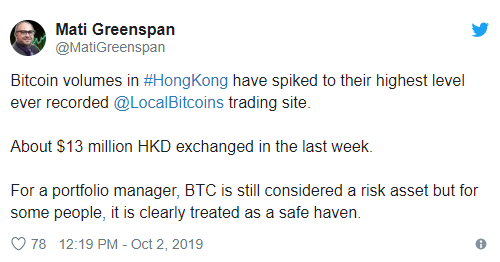 Statistics derived from LocalBitcoins showed that about 13 million HKD was traded in bitcoins during last week, a figure higher than any other time period in history. The “king crypto” as bitcoin is sometimes called therefore restores hope in the minds of many believing it to be a fast-developing monetary technology.

Hong Kong has fallen into a deep state of economic imbalance and chaos since mid-2019. In August, Coingape reported that Bitcoin saw constant demand in Hong Kong as protesters sought anonymity. At the time, the price of bitcoin on popular Hong Kong crypto exchange, TideBit was about $11,477.34, about $80 higher than figures derived from the coin market cap and most other crypto exchanges outside Hong Kong. As a matter of fact, the figure had been around $160 within the previous week of the time frame.

It is not a coincidence that bitcoin is riding these turbulent times in Hong Kong. The anatomy of bitcoin as a cryptocurrency and the anonymity of its transactions has possibly appealed to this set of people who now use bitcoin in their everyday activities in order to escape the police

Another Billionaire Has Joined the Bitcoin Investors Line