Bitcoin lost upwards of $800 in the past 24 hours, marking a sharp decrease of around 7 percent on the day. Conditions like these would typically leave room for altcoins to thrive, but this isn’t the case. The entire market is bleeding heavily, while Bitcoin manages to retain a high dominance of around 69 percent. 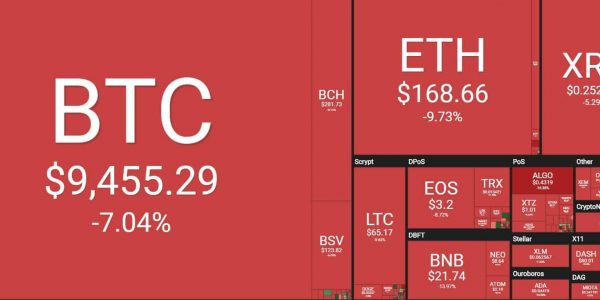 In the past 24 hours, Bitcoin lost around 7 percent, shedding $800 off its dollar value and losing about $13 billion of its market capitalization. As Cryptopotato reported, there are a few important levels to watch as the price broke down below $10,000. Namely, this includes the support at $9,400-$9,500 where we currently are, as well as the next significant level of support at $9,200.

However, looking at the overall market condition, it appears that Bitcoin dragged down all alternative coins with it while managing to retain its relative high dominance rate which is currently standing at 69 percent.

As seen on the image, the entire market is heavily in the red, with Binance Coin (BNB) leading the downward momentum with losses upwards of 12 percent. Litecoin and Ethereum are closely behind, losing 10% and 9.3% respectively.

Things are looking a bit better when trading against Bitcoin, even though BNB is still down quite a lot – 6% on the day. XRP manages to hold strong against the falling BTC, gaining 1.4% amid this bloodbath.

In any case, it’s worth noting that Bitcoin managed to retain its dominance, which means that altcoins are unable to boom even when the leading cryptocurrency is falling hard.

Why Are Altcoins Unable To Recover?

While there surely are many reasons for which the altcoin market is struggling to mark any serious gains in the past three months, the lack of utility is undoubtedly amongst the leading factors.

Commenting on the matter was Sasha Ivanov, Founder & CEO at Waves, who outlined that many of the utility tokens don’t really have any utility and that their approach needs to be reconsidered.

The problem of altcoin market now is that utility tokens don’t really have much utility, including protocol tokens. I guess it’s time to rethink the approach in terms of actual utility of the #blockchain platforms we create.  New approach to #DApps  economics is badly needed.

On the other hand, however, the lack of utility doesn’t really seem to concern many of the investors. According to a Twitter poll, 80% of the participants bought altcoins solely for the huge returns.

One can easily see how this is a problem. While it’s easy to see why someone would invest in a token solely for the return, this automatically turns the value of said asset into nothing but mere speculation.

This is, perhaps, the reason for which Bitcoin has managed to establish itself as the leader on the market, as it has already proven its utility.