Bitcoin just lost another major chunk of its value in a crushing red candle. Plunging to as low as $7,450, the largest cryptocurrency lost around 8% in less than an hour. This is the lowest point that Bitcoin traded at since May this year. The entire market was dragged down, as all major altcoins are also trading in the red.

Bitcoin failed to gain enough momentum and struggled at key resistance levels above $8,000. As such, it remained stuck at a narrow range trading around that mark.

Despite plunging down to $7,450, the price made a very slight recovery and it’s now trading at around $7,560. We have yet to see if the support at $7,500 will hold but if it doesn’t, we can expect the next serious one to be at $7,200 where is the Golden Fibonacci historical level. 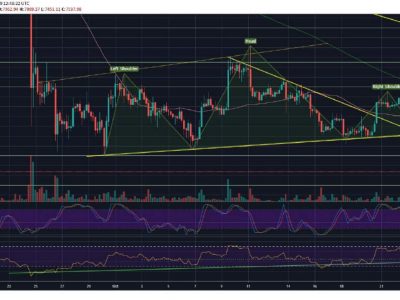 The latest plunge reduced Bitcoin’s total market cap down to $138 billion. The BTC Dominance index also decreased a bit and it’s currently standing at 66.2%. This indicates that altcoins, at least for now, didn’t capitalize that much on the plunge and lost value as well.

Altcoins Are Suffering As Well

The situation with altcoins is no better. The market is covered in red in its entirety.

The move shows that the entire market is suffering and that investors are not, at least for now, finding relief in altcoins.

We have yet to see how things will unfold but it’s perhaps safe to say that the cryptocurrency community has seen a shift in its sentiment as the latest developments bring worries back that the positive trend of 2019 might have reversed. 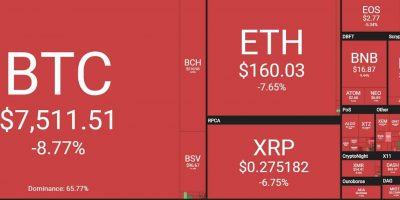 The Report by Ripple Awakes XRP and Price Rises