During the last couple of months, Bitcoin and other cryptocurrencies have experienced high volatility due to some events. The most obvious reason was the famous Bitcoin tweets of Elon Musk due to which, the cryptocurrency market fluctuated enormously. Elon Musk Bitcoin tweets became the center of crypto market and the man behind the Bitcoin Volatility kept on playing with his meme tweets.

We can ask ourselves why Elon Musk jumped into Bitcoin in the first place. If we understand the underlying value that Elon Musk’s companies and Bitcoin bring to the world then some concepts would be easily understood. Tesla car manufacturing company wants to allow people to enjoy driverless cars, SpaceX wants to make reusable spaceships to tackle the cost and environmental adversities that building new spaceships causes. Similarly, Bitcoin is a revolutionary decentralized payment system. Those innovations can be linked with each other easily.

One of the first times that Elon Musk was mentioned with Bitcoin was during the FYI podcast of ARK Research. CEO, CIO, and the founder of ARK Invest, Cathie Wood and Tasha Keeney, the analyst at ARK Invest, had a discussion on Tesla and high technology with Elon Musk. At the end of the conversation, the host asked about the recent chats with Jack Dorsey on Twitter and his thoughts on cryptocurrencies.

“I think Bitcoin structure is quite brilliant” and added Ethereum and others while talking. “I am not sure that it will be a good use of Tesla’s resources to be involved in crypto… We are really trying to accelerate the advance of sustainable energy. Actually, one of the downsides of cryptocurrencies is computational, it is quite energy-intensive, it somehow constrains the creation of the crypto… Paper money is going away, and crypto is a far better way to transfer value than the pieces of paper, that’s for sure, this has its pros and cons… Tesla is not going to start selling bitcoin anytime soon.”

This podcast was broadcasted in February 2019 when the crypto community did not know what was going to happen.

Does Elon Musk Have Bitcoin?

The conversation in the podcast and the future events may urge people to ask whether Elon Musk has Bitcoin. As we will cover later on in this blog, it is a very tricky question that needs to be answered- Does Elon Musk manipulate the market to get profit?

On 22 February, in the comment section of his own tweet, Elon Musk stated that he has Bitcoin. However, the amount of Bitcoin that Elon Musk owns is insignificant, and speculation will not affect as much as we can expect. Elon Musk has only 0.25 BTC in his Bitcoin wallet, and these bitcoins have been sent by his friends.

Elon has been repeating himself since 2018 February that he has only 0.25 BTC. Elon Musk’s Bitcoin investment is so small that we cannot expect him to speculate the market to profit from it. The recent tweet proves this argument once again.

What Does Elon Musk Tweets Say About Bitcoin?

Elon Musk is the influential person that helped Bitcoin to reach the masses. With the help of modern technologies, it became easy to buy Bitcoin in UAE or anywhere else regardless of where you are, and this increased the magnitude of the impact.

Like the stock market, also the crypto market was affected by the COVID-19, and the price of cryptocurrencies hit the bottom in March 2020. Since then, the cryptocurrency market began to rise gradually. During September and October 2020, bitcoin was preparing to take off to the moon. In December 2020, Bitcoin broke the previous ATH of 2017 and rose above 20,000.

As Bitcoin began to get traction and break the ATH records, Elon Musk began to tweet about bitcoin casually. In December 2020, Elon posted many tweets about Bitcoin. 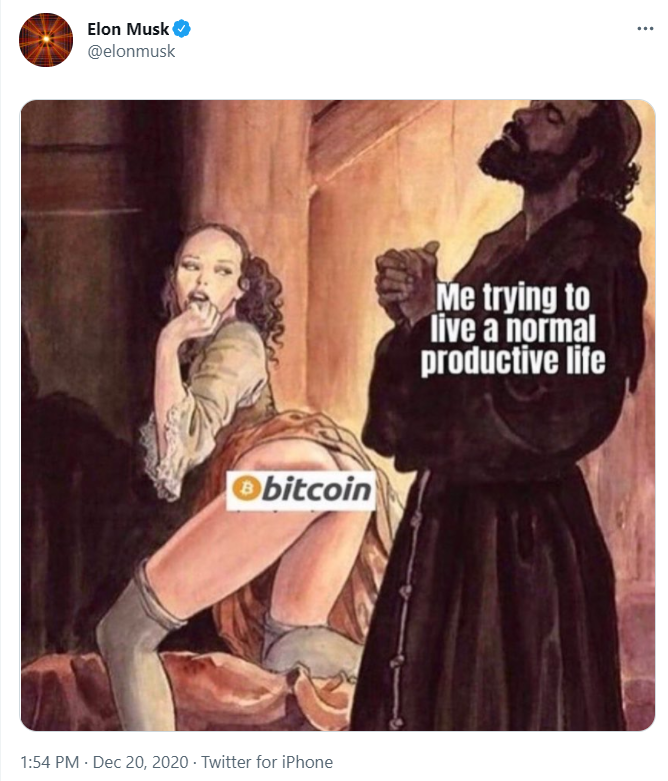 All these three tweets were just in one day and did not cause much more volatility in the price of Bitcoin. These tweets can be considered as an introduction of Bitcoin to crowds. Tweeting about bitcoin increased awareness about Bitcoin and cryptocurrencies. Before that, Bitcoin only was known and used by small communities. If we think about the futuristic ideas and companies of Elon Musk, then people inferred that this could be something with great potential.

As Bitcoin gained traction, many people begin to buy Bitcoin, and Elon Musk was leading this trend. The Musk effect began to show up in January when everyone expected him to post anything about Bitcoin. Till that day, Elon Musk was mainly tweeting about his fav meme coin- the DOGE coin. People assumed that the only cryptocurrency that Elon should continue to tweet about was Bitcoin. The crypto community was waiting for that day when one social media update led Bitcoin to rise significantly.

Elon Musk- the crypto king, wrote “#bitcoin” to his account bio on Twitter. On 29 January, before changing his bio, the price of Bitcoin was around 32-33k. After altering his bio on Twitter, the price of bitcoin spiked by 6,000. People began to buy Bitcoin instantly after Elon Musk changed his bio. Following the change in bio, Elon Musk tweeted about Bitcoin by saying

“In retrospect, it was inevitable.”

This can be interpreted as changing his bio to bitcoin was inevitable.

The purchase volume of Bitcoin was so high that just in minutes, BTC hit around $38,500. You can notice the difference in volume from the graph, long green bars display a huge buyout of Bitcoin. This was the beginning of the Elon Musk Bitcoin influence. 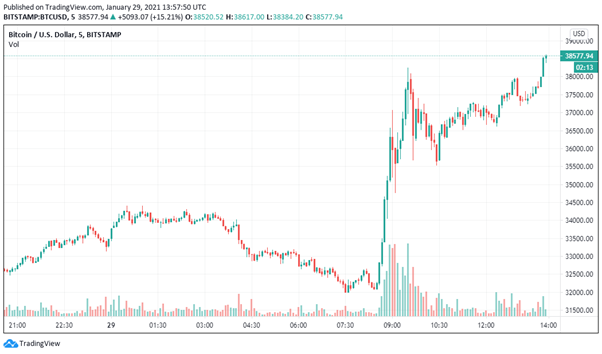 On 1st February, Elon Musk talked about Bitcoin during the Clubhouse discussion. He mentioned that

“I have to watch what I say here because it tends to move the markets.”

Also, he mentioned the role of his friends in trying to convince him to buy Bitcoin. He added that

“I think that Bitcoin is a good thing. I am a supporter of Bitcoin.”

Elon even mentioned that he is late to Bitcoin-

“I am late to the party, but I am a supporter of Bitcoin. Bitcoin is on the verge of getting broad acceptance from conventional finance people.”

When Did Tesla Buy Bitcoin?

Even though Elon Musk does not have a significant amount of Bitcoin holdings, he bought an excessive amount of Bitcoin for his company- Tesla. This was expected since Elon Musk began to mention Bitcoin frequently on social media. The big day arrived when Elon Musk approved that Tesla bought Bitcoin. This can be considered as Elon Musk’s investment in cryptocurrency not in the form of personal investment but the company.

According to the Securities and Exchange Commission, Tesla Inc. has added $1.5 billion worth of Bitcoin. In the SEC filing, it has been stated that Tesla “may acquire and hold digital assets from time to time or long-term.” Tesla updated the investment policy and to diversify and maximize the returns on their cash which is not required to maintain the operating liquidity. In the filing, it is also mentioned that Tesla can receive payments in the form of Bitcoin in the future.

“You can now buy a Tesla with Bitcoin.”

However, this payment option was only available in the USA. Commencing 24th March, people who reside in the USA could buy a Tesla car with Bitcoin.

Elon added in his next tweet that this payment option will be available in other countries later this year. Also, he dived into detail about Bitcoin payments. Unlike some other Bitcoin payment systems,

“Bitcoin paid to Tesla will be retained as Bitcoin, not converted to fiat currency.”

Tesla was going to use an internal node with open-source Bitcoin software.

After the announcement that Tesla accepts Bitcoin, the price of BTC rose at first and then plummeted. About $2000 increased from $55,000 to $57,000, the price fell down to $51,000. Even though there was an increase in the price of BTC, afterward the price went down below the previous level.

While everything was going superb for Bitcoin, one tweet by Elon Musk let the Bitcoin community down. Everyone was shocked by the decision of Tesla and Elon Musk on 13th May. The recent announcements about adding 1.5 billion to the balance sheet of Tesla and accepting payment with Bitcoin for Tesla cars increased the hype, and everyone was thinking about “Going To The Moon🚀.” However, Elon Musk hit from the back when everything was going too well.

Elon Musk announced that Tesla stopped accepting Bitcoin as a payment method. He comes up with the reason that Bitcoin is consuming way too much energy, and it is not correlated with the company’s goals about sustainable energy. Elon Musk thinks that Bitcoin’s carbon footprint is too much and it harms the environment. As we know, Tesla cars are electric cars and emit a low amount of emission to the air.

“Cryptocurrency is a good idea on many levels, and we believe it has a promising future, but this cannot come at great cost to the environment.”

Elon Musk also addressed the question of whether Elon Musk will sell the bitcoins of Tesla:

“Tesla will not be selling any Bitcoin, and we intend to use it for the transaction as soon as mining transitions to more sustainable energy. We are also looking at other cryptocurrencies that use <1% of Bitcoin’s energy/transaction.”

This tweet pretty shook the crypto markets. Right after his tweet Bitcoin fell down sharply. Before the notorious tweet, Bitcoin was trading around $54,400, and just in 3 hours, it plummeted to $45,700. 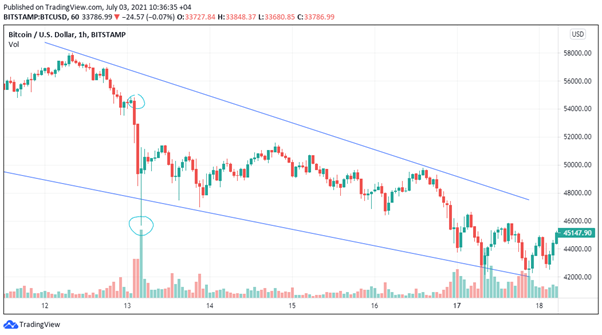 After the tweet, Elon Musk began to post anti-bitcoin posts, and the price of Bitcoin continued to fall. On 22 June, Bitcoin hit its bottom price of around $28,600. If we take that tweet as a trigger for what happened afterward then we can conclude that the price of Bitcoin fell by 47%.

Many of you may wonder why the simple tweets of Elon Musk have influenced the crypto market in the first place. We have covered the crucial events about Elon Musk and Bitcoin. One factor in explaining the effect of Elon Musk on Bitcoin is his innovative image. If Bitcoin is the innovation, and Elon Musk should be the image. Secondly, the company’s adoption of Bitcoin spread to Tesla. Here the actual reason was not Elon Musk but his company. As the CEO of the company, Elon added additional power to the Tesla Bitcoin updates. Finally, the wide adoption of Bitcoin is imminent with the help of centralized exchanges. Since people think that Elon’s tweets about Bitcoin will probably move the price, then they wait for it, and they buy and sell Bitcoin instantly.