France Says No To Facebook’s Libra 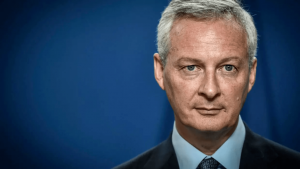 France has publicly revealed that Facebook Libra project cannot be allowed to thrive in any European country. This was made known by French Finance Minister Bruno Le Maire on Thursday while speaking at an OECD conference in Paris.

France is currently leading the pack of European countries that are striking at big tech companies. It passed a 3% digital tax on several U.S. firms like Facebook, Amazon, and Google. According to the French Finance minister, Bruno Le Maire,

“All these concerns around Libra are serious. So I want to say this with a lot of clarity: In these conditions, we cannot authorize the development of Libra on European soil.”

Le Maire stated concerns around the possibilities of Libra undermining the sovereignty of other nations’ currencies and also issues regarding terrorism financing and money laundering.

Facebook Libra has fallen into choppy waters with many regulatory bodies across Europe and the United States since it was announced in June. Security, privacy and concerns around possible illicit use of the global digital currencies are blocking Facebook in developing the proposed controversial project. Recently, popular jurist and European Central Bank’s (ECB) legal official, Yves Mersch, made a comment on Facebook’s controversial proposed global digital currency project calling it “beguiling but treacherous.” According to Yves,

“I sincerely hope that the people of Europe will not be tempted to leave behind the safety and soundness of established payment solutions and channels in favor of the beguiling but treacherous promises of Facebook’s siren call, ”

Also, earlier this week, the Libra association was reported to have turned to Swiss FINMA for a payment system regulatory approval. According to a statement released by the association,

“Switzerland offers a pathway for responsible financial services innovation harmonized with global financial norms and strong oversight,”
“We are engaging in constructive dialogue with FINMA and are encouraged to see a feasible pathway for an open-source blockchain network to become a regulated, low-friction, high-security payment system,”